by Sunburned Hand of the Man 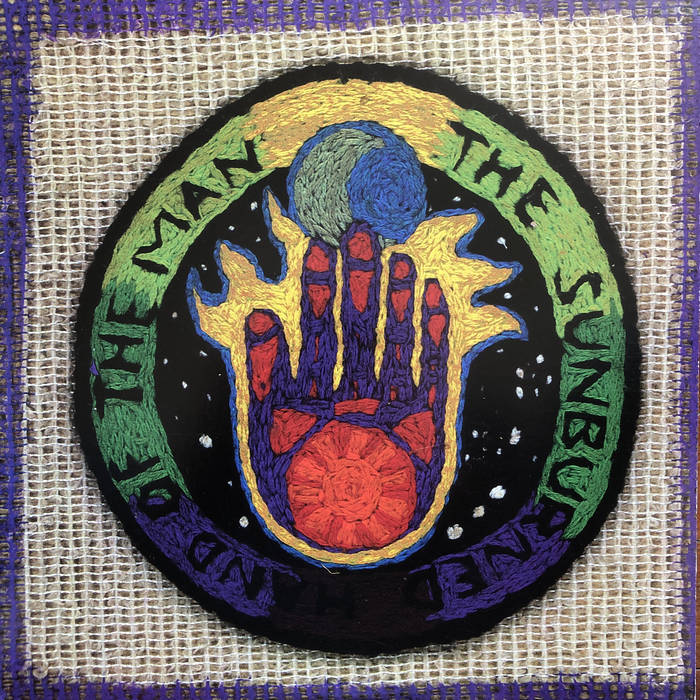 Pitchfork - 9.0 Rating
"When Carl Jung carved his symbols of mankind onto the face of his beloved cubic lawn jockey, among the archetypes of the collective unconscious present was surely the open hand. Part invitation and part warning, very few pictorial representations-- with the exception of the smile or frown-- are so readily recognized as the forward stare of the uncurled hand. With one glance at the album cover of The Sunburned Hand of the Man's latest release, Headdress, it's apparent that the spirit of the deceased Swiss psychiatrist is alive and well in this musical collective hailing from the darkest recesses of Massachusetts.

The knit hand encircled by a background of stars embodies both the welcome and caution inherent in the music that is in turn violently cruel and unconformably beautiful. The fact that it's a patchwork appendage, obviously tailor-made with minor imperfections magnified, displays the collective approach that more than likely went into the creation of the musical product itself. One imagines a procession line of long-haired bohemians printing and then hand-gluing album covers, inserting fresh-pressed vinyl into protective sleeves made from recycled rolling papers, then boxing and shipping the fresh goods away from the confines of an abandoned barn surrounded by three feet of mostly white snow.

It's from this natural and mystical bond that the music emanates effortlessly. The opening track "Shitless" presents all of the musical motifs at the band's command upfront for aural inspection. A funky bassline and a smattering of odd percussion act as the soil and ground from which the guitars grow forth, as a recorder eventually pushes forward against a barrage of wails and grunts, more animal than human. "Sense of the Senseless" develops from this with a steady hypnotic drone cut intermittently by bird-chirps and struck bells. A polyphonic chant arises-- a modern Dies Irae-- as a whistle signals a tempo change that finds solace solely in the errant harmony of frantic shouting. The song ends with a lamenting cry to "learn from experience," before fading far too quickly into the harmonica-driven track "The Illness".

With any luck, the band will heed their own plea, as the album's only true criticism can be that, at times, it sounds more like a collection of inspired moments that are cut far too short than a fully developed composition, more than likely a consequence of its finite medium. Brief windows of ingenuity such as the echo and din of the title track or the droning ebb and flow of "A Second Guess" would find more time to breathe, develop, and recapitulate given the format of a double album. As is, though, songs such as "Yes, Your Highness" don't have time to pick up the momentum of such Varèse-pleasing ideas as the use of sirens and strong complex rhythms incorporated into regular song structure.

This is not to say that the entire album feels abruptly halted or rushed, as "The Underground Press" proves contrary. Easily the most developed piece, if not the best, this is the swaying back and forth number on the album that allows the girl wearing the kitten ears at the live show to feel that she's comfortable enough with the crowd and herself to take off her shirt. Stravinsky himself would be proud of this unadulterated use of rhythm and beat, augmented by loud hypnotic chords pulsing from a variety of instruments, ultimately falling prey to the screams and whoops that herald its necessary finale.

Acting as a subtle trend in the album, the sense of prevalent necessity from song to song further merits one of the superior critiques that can be lauded upon a work of art, the discrimination of timelessness. This is not to say that the album could have been released at any given time with similar acclaim-- though it undoubtedly could have-- it's only a comment upon how the music flows so readily with complete and utter disdain for trend and fashion that it feels simultaneously primitive and advanced, while retaining every bit of its musical relevance. In the end, the music leaves one with a sense of somber contentment and satisfaction as mysterious in origin as the warmth received from the open-hand greeting of a stranger." - Andrew Bryant

Mathieu Duval's "My Record Collection" says:
"After tons of CD-R-only releases, the sunburned clan finally releases it's first proper album on vinyl and what a doozy it is. There's enough funky basslines and psychedelic island rhythms here to make you run a fever and dance all night to drive those evil spirits away. This is definitely one of the group's most psychedelic albums alongside Jaybird, and the only thing that makes it slightly inferior to it is the fact that the build-ups in the songs are not as strong. It's roots are still firmly planted in rock and none of that crazy noisy shit that was to grace later albums is found here. On A Second Guess, there is some (very) short-lived La Monte Young-like vocals. I found this LP for under twenty bucks just a few months after it had sold for well over one hundred on eBay. Goes to prove that a little patience can save you a lot of money. Not that this album wasn't worth those hundreds of dollars."

Sunburned Hand of the Man Massachusetts

Sunburned Hand of the Man recommends:

Bandcamp Daily  your guide to the world of Bandcamp

Featured sounds by K.Spark and WIZDUMB, plus Basi joins the show to discuss his latest release.